The Cross As an Instrument

Something important happened on the cross. The cross is not just an ornament that people wear around their necks. Neither is it a tool used to ward off vampires! The cross is an instrument that heaven’s Champion, Jesus Christ, used to thwart the plans of hell for your life!

Jesus said, in effect, “Hell: I am going to take you on!” And the Bible records in Colossians 2:15 what He did:

15 And having spoiled principalities and powers, he [Jesus] made a shew of them openly, triumphing over them in it.

Thank God for the cross! This generation is going to find out about the power of the cross, and when it does, it’s going to be hell for the devil!

In the cross—Jesus broke the power of hell off humanity.

In the cross—Jesus stripped the armor off the adversary.

In the cross—Jesus tore the devil’s weight and yoke off our lives and provided a brand-new lifestyle of victory, anointing, and power for us.

In the cross, God provided the death of your old identity and provided a brand-new identity for you in God.

When the Veil Was Torn in Two

Thus, God broke Jesus’ body to bring through His vessel the provision He had made for us. And at the very moment the Roman soldier pierced the side of Jesus, the Bible says the Temple veil was torn in two (Matthew 27:51; Mark 15:38).

That means when Jesus was pierced, God said, “That’s it! Sin is broken! The veil is ripped! The wall of separation is smashed!”

Jesus said, “No more will mankind need to go through an intercessor or a go-between. Now, I have become the Go-between. I have become a man, and I will hold on to humanity and the Father. They will become part of Me.”

And God rent the veil in two. When the veil was torn, the Bible said something came out of Jesus’ side. Out of His body—the vessel, the human physical frame of the Lord Jesus Christ—came forth heaven’s provision, which was the blood and the water:

34 But one of the soldiers with a spear pierced his side, and forthwith came there out blood and water.

The Bible says in Hebrews 10:22, “Let us draw near with a true heart in full assurance of faith, having our hearts sprinkled from an evil conscience, and our bodies washed with pure water.”

Where did that provision come from? It came from Jesus’ side. Why? Because Jesus’ body became a type of the veil. Jesus allowed His body to be broken so He could break the veil separating mankind from God and bring mankind heaven’s provision. He brought the blood, and it washed you clean. He brought the Word, and it is renewing you daily.

But Jesus didn’t stop there. When He rose from the dead, that veil of separation was torn in two. And Jesus told Thomas, “Thomas, take your hand and thrust it into My side.” There was still a gash there, because God wanted us to know heaven will never be closed again!

Today your miracle is closer to you than you believe. As a matter of fact, if you believe it, you will get it, because that’s how close it really is.

But Jesus didn’t stop there. He not only provided the blood to cleanse us and the water of the Word to wash us; He said, “...All power is given unto me in heaven and in earth” (Matthew 28:18).

Then He said to the disciples—and to us:

49 And, behold, I send the promise of my Father upon you: but tarry ye in the city of Jerusalem, until ye be endued [anointed, or smeared] with power from on high.

By now, Jesus had risen from the dead, and the disciples were born again. They weren’t just believing on credit anymore. The cross was a fact; it was history, and the devil was defeated.

Jesus rose from the dead with the keys of death, hell, and the grave (Revelation 1:18). His blood was made available. The disciples were saved. And He stayed with them 40 days and taught them the Word of God.

The disciples were good scholars. They wrote the Book. So we should listen to them rather than some contemporary explanations of what they said. We need to know the Word rather than what someone said about the Word.

“Tarry. Wait until you are endued.” What was Jesus saying? He was saying, “Listen, I made available to you through the breaking of My body two elements, but they are not enough. You are washed with the water of the Word, and you are redeemed by the blood, but wait! Don’t preach. Don’t do a thing. Stay in Jerusalem until you are smeared and anointed with the third element.

“I am going to ascend to heaven with my blood. I have already sprinkled the mercy seat with it. And I will pray the Father, and because that mercy seat is sprinkled and provision is made, He will send forth the Holy Spirit.

Jesus was saying, “You are washed. You are redeemed. But wait! When that anointing comes that I am giving you, you will go, and these signs will follow you. You will cast out devils. You will speak with new tongues. You will lift up serpents” (Mark 16:17). Notice how powerful the anointing is!

The Victory of the Cross

Some have missed the victory of the cross. For example, when a snake jumped out of a fire and fastened its fangs on Paul’s hand, he just shook it back into the fire, and according to Acts 28:3-6, he suffered no harm.

Some fail to understand that when Jesus paid for us, He provided the ability for us to live beyond the contamination of the world. He even promised that if we drink any deadly thing, it will not harm us. I didn’t say it. That’s what Jesus said. However, this doesn’t mean you are to buy poison and drink it.

He told His disciples, “It is expedient that I go away, because as long as I am here, there will be only one human vessel full of the anointing of God. But when I go, I am going to duplicate Myself.

“I am going to send the Holy Spirit, and eventually there will be millions of human vessels with the ability to unmask the devil and let everyone know he is defeated. They will let everyone know that God is on the throne—and Calvary has prevailed on behalf of mankind! (See John 16:7.)

“I have broken My body and now, through that provision, the anointing is going to come. Tarry until you are endued with that power from on high.”

The Day the Anointing Fell

Then the Bible says,

1 And when the day of Pentecost was fully come, they were all with one accord in one place. 2 And suddenly there came a sound from heaven as of a rushing mighty wind, and it filled all the house where they were sitting.

“And there appeared unto them cloven tongues like as of fire, and it sat upon each of them” (verse 3). They were consumed with God’s anointing.

“And they were all filled with the Holy Ghost, and began to speak with other tongues, as the Spirit gave them utterance” (verse 4). It was an overflowing indwelling.

The anointing was provided so we could learn to walk in it.

The anointing will do things that are beyond your ability to comprehend, if you will only cooperate with it.

Confess, “I shall be anointed with fresh oil!”

As a matter of fact, much of what people say they are believing is nothing more than doubt expressed in religious form. When you say, “I believe God can,” you are still not committing yourself to God. He said, “I can never lie. I will never leave you nor forsake you. I am the God that healeth thee.” He committed Himself to you.

So when you say, “He can, but I don’t know if He will,” you are not committing yourself to God. Your faith is not laying claim to what He has promised. Really, your confession is nothing more than doubt communicated in religious form.

The anointing will rarely work where it is not received. On the other hand, I have seen God knock people down who were standing around mocking, and I’ve seen them start sobbing, but that’s not His usual mode of operation. God does not violate human will. He knows when our heart is truly saying yes and believing and when our mind is only claiming that it believes.

Cooperating With the Anointing

I’ve laid hands on people and sensed so much power surge around them, I had a hard time standing. The power of God was moving all over their physical bodies, and I could tell they were at the point of either receiving a miracle or experiencing a disappointment. But because their hearts were not in contact with the anointing, it seemed as if it was not a reality to them.

Because God is such a gentleman, humans can put a limit on His power. I believe this is why skeptics say, “It was just an emotional experience. He got all emotional, but the person right next to him did not experience a thing.”

God brings His power and anointing to make contact with your spirit so He can fill your spirit with His will and then explode His plan into your life.

This is an excerpt from
How to Receive Your Miracle
by Doctor Christian Harfouche. 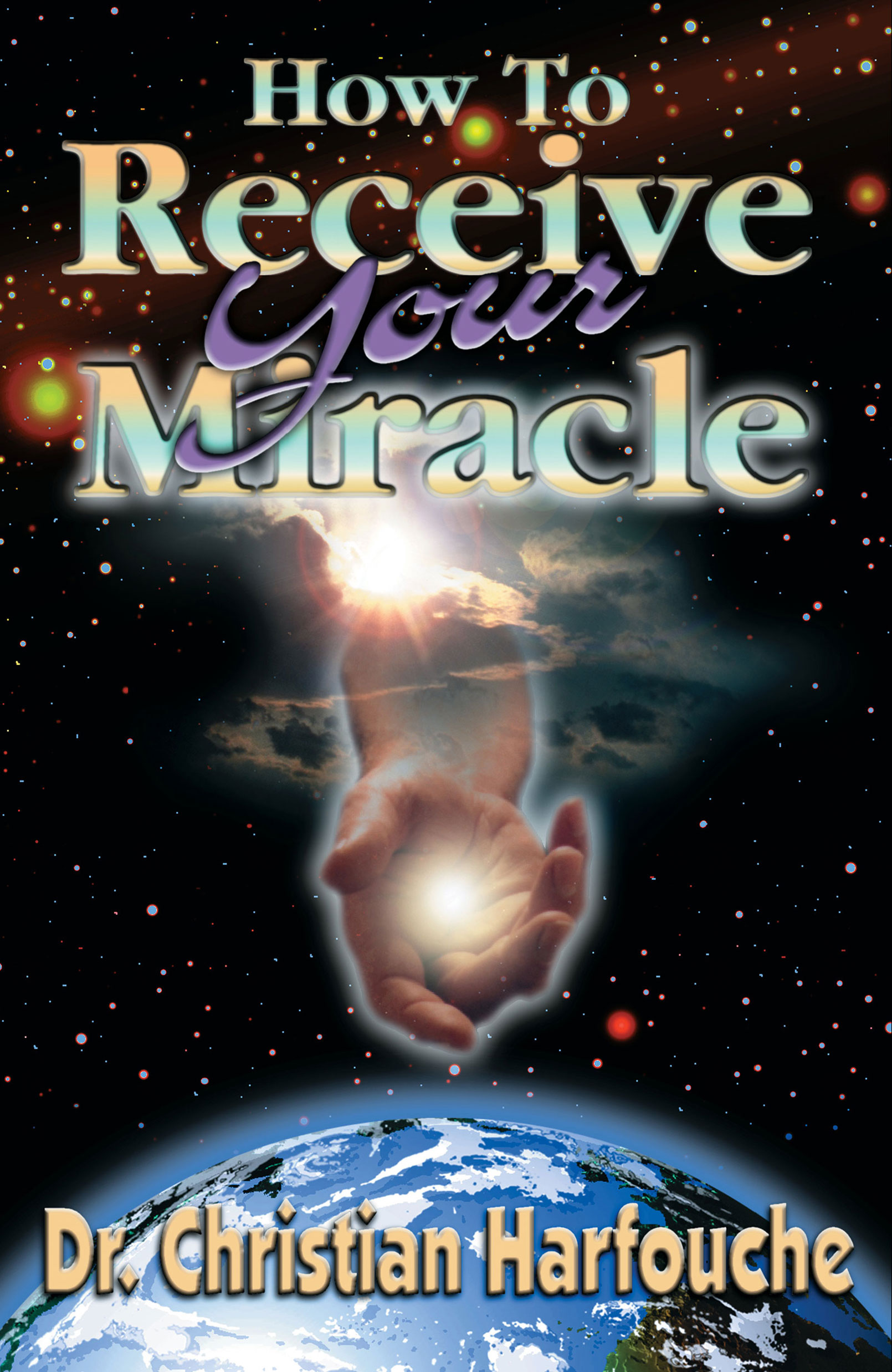